Merged mining means that one can mine both Hathor and Bitcoin at the same time, at the cost of dedicating a few bytes of the BTC block payload to carry HTR data.

For the full techinical specification, check out the Merged Mining RFC.

As the Bitcoin network hashrate is extremely high, it's unlikely that a Bitcoin block is found when doing solo merged mining. However, the advantage of merged mining over direct mining (only mining HTR) is that it's possible to use unmodified mining equipment, the same as when mining Bitcoin.

Currently we provide a stratum server for doing solo merged mining that anyone can use. Feel free to run your own server though.

It is in beta phase, and although we think it's working well there might be problems from time to time.

For example, these are two valid usernames/workernames:

These addresses are used directly on the coinbase output of each coin that the miner is mining. This is because even though it uses a pool protocol (stratum) it is still solo mining both coins.

Caveats: because it is solo mining, finding any BTC will be very unlikely.

This server has been extensively tested with Sha256 rigs on MRR.

You can add this server to your Favorite Pools, click "Add Pool", and fill these fields:

For example (note that Workername (-u) field is cropped, but the full value is there): 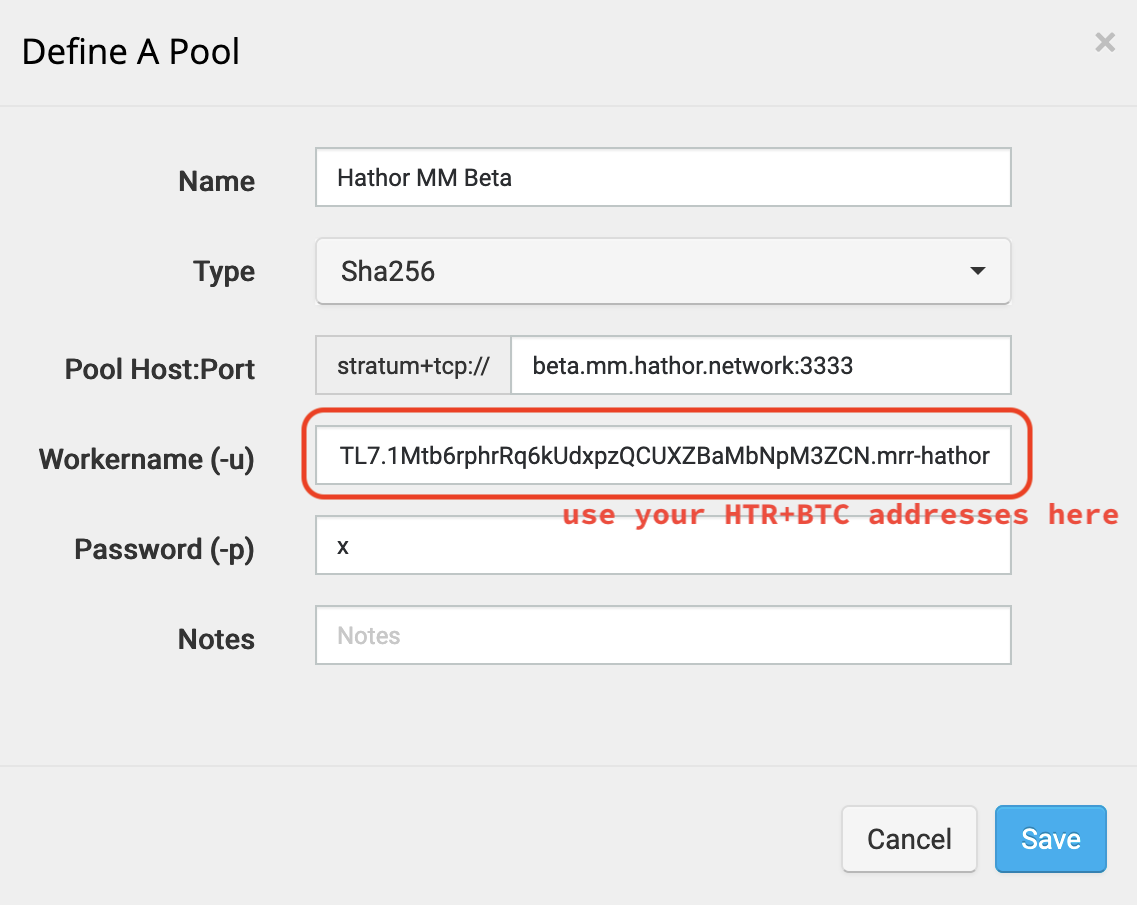 Caveats: because Hathor needs to update jobs more frequently than Bitcoin, jobs have generally smaller difficulty. MRR may complain sometimes about a low difficulty, but it should be fine.

Using it with NiceHash (NC)

NiceHash is also supported. First, add the server to your list of pools: 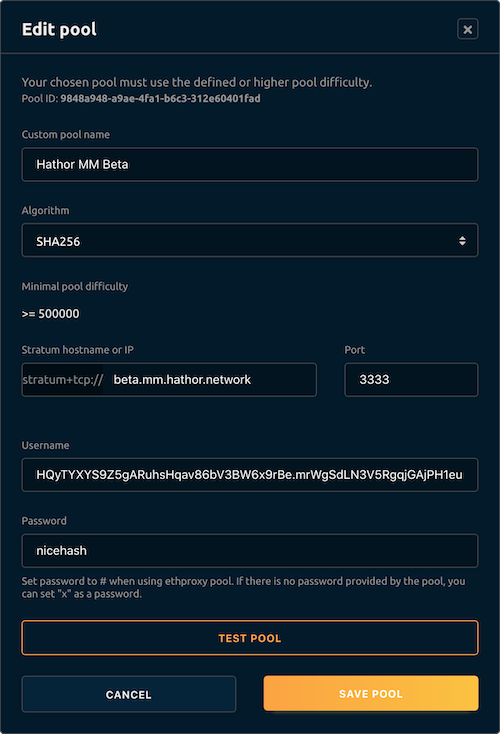 Then you just need to go to the Marketplace page and place an order to start mining. Remember to filter orders for SHA256.

You can search for your miners/workers on https://beta.mm.hathor.network/status to see info like the mining difficulty (as set by the server) and hashrate (as estimated by the server). Note that this will require a JSON viewer (built-in in Firefox, but not Chrome).

If you experience any problem, please go to our Discord channel #mining and let us know.

Using our public server is a good way to start but it means you are mining on your own, so using a mining pool is always the best option.

These pools are managed by community members and are not affiliated to the Hathor team.

Setting up your own server

Check this guide for running a Hathor fullnode.

It's important to write down the port where the API is exposed, using --status. It'll be used later when starting the coordinator.

Instructions for running a Bitcoin fullnode can be found here.

You can set RPC username and port by using -rpcuser and -rpcpassword. Default fullnode port is 8332 for mainnet.

The Hathor coordinator is available on the same repository as hathor-core: https://github.com/HathorNetwork/hathor-core.

Starting it is similar to starting a fullnode:

Supposing the Hathor fullnode is running on localhost with API exposed on port 8080 and Bitcoin fullnode is on the local network (let's say 192.168.1.34; user=foo, password=bar), this would be the starting command:

WARNING: you must replace HATHOR_ADDRESS and BITCOIN_ADDRESS with your own Hathor and Bitcoin addresses

The coordinator can also be run with the same Docker image as the fullnode.

When running the coordinator and fullnode on the same host with Docker, they won't be able to communicate by using localhost, as each container runs on a separate network stack. It's recommended to use the IP of the fullnode's container (here's how to find a container's IP address).